Okido Yoga UK celebrated its 30th anniversary in the summer of 2014 since its formal establishment. Although we have never had our own centre and our activities have always been small in scale, we have managed to run the organisation with a pure motivation and a sincere attitude, bearing in mind Oki-sensi’s words “Make a pure organization, however small it is”. On 5 July 2014, 70 people, old and new friends, gathered at a rented hall of the Quaker Meeting House in Watford near London, and had a most wonderful celebration event lasting the whole evening, blessed by a comfortable summer breeze. 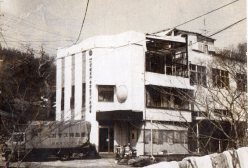 The evening started with a slide show. The very first one was of Mishima Dojo in Japan, which by now remains only in our memories and hearts. The photo was taken when I was still living and studying there, in the early 1980s. The following 170 slides roughly introduced activities of Okido Yoga UK during the last 30 years.

Then Anna, who witnessed the most of our 30-year journey, gave a speech on ‘A View of Okido Yoga UK’, which you can read below. Anna’s speech was followed by Jocelyn’s reading of five special tributes to my late husband, Hirotsugu Mori, who passed away in 2002. His selfless contribution during 1984-1998 was enormous to Okido UK and touched many people’s hearts. Following the reading, my son Seiya played a piano piece ‘The Name of Life' from the film ‘Spirited away’. It perfectly matched the mood of the occasion.

Next was a presentation to thank Bob Wellburn, our trustee, Mizue Tamaki, who worked hard to establish our organisationin, and Setsuko Dawson on behalf of Clearspring Ltd, who has been our great supporter all this time.

Then we took a break with laughter exercises led by Michael, which was followed by international video greetings from Mieke and Jan Vervecken of International Shiatsu School of Belgium, and my two eldest children who grew up with Okido UK. It was a pity that Tatsumura-san’s video could not be opened somehow. 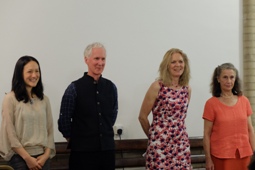 The next part was an introduction to the four people who completed or were going to complete the 4-year Okido Teacher Training delivered through a collaboration between Okido UK and Okido Holland. Michael and Junko have already finished this training and are teaching in their own settings. Anna and Trish are going to finish soon.

Four years of practice and study is a serious commitment. Because Okido yoga is life-style yoga and karma yoga, this teacher training scheme is not only about learning teaching skills but also about developing new insights as well as a solid physical and emotional base to carry them out. I am very proud of these four people.

After this, I introduced everyone present by groups: old, new, foreign, etc. We cheered each other.  Everyone made a great effort to be there and to make this event special, with some people travelling from Holland, Wales, Cornwall and other distant areas. Thank you so much.

The last speech was by Trish and was called ‘My Experience: Teacher Training & Pledge Book Translation Revision.’ This is readable in News 21. 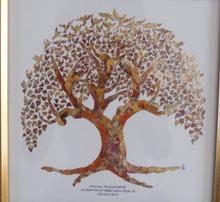 Also News 22 will comment on our translation-revision work for Oki sensei's 16 pledges. Then we took a whole group photo.

I was then just about to say ‘Now, Party!’ but Junko stopped me. I was given a present, a painting of a beautiful golden ‘Tree of Life’. At its roots are written the words ‘FROM ALL YOUR STUDENTS, CELEBRATING 30 YEARS OKIDO YOGA UK 5TH JULY 2014’. So moving! Thank you so much!

Now, Party! With gorgeous food made from carefully selected organic ingredients, cooked by professional and nearly professional hands. I must mention this: Anna and Junko had said to me a few months before, ‘Tomoko, never ever worry about the party food. We will take care of that part. You do whatever you have to do.’ Trish and John came from Suffolk even a day before to help. How long did they spend shopping, preparing food at home before the event and in the kitchen on the day? I don’t need to question. I just know that they will do whatever they are engaged in until they see all is done. Strong Karma Yoga spirits of sincerity, humbleness, responsibility and loving care! Also laughter and jokes are never forgotten.

So in a very open cosy atmosphere, everybody had a great time to fill a gap of time and distance and refresh the friendship. We finished the evening with a song that is originally a Japanese song and used to be sung at the end of every party in old Mishima Dojo with Oki-sensei. ‘Itsu-made-mo taeru-koto-naku ….’ with a feeling-full melody. To make it easy, I had translated the lyrics into English: Forever without ceasing, let’s keep our friendship. I say ‘Good-bye’ for today till I meet you again. We sang three times, even in Japanese at the end!! 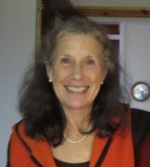 In 1978 very interesting things were happening in the world, below the superficial there was a groundswell of change, we really thought a new consciousness was not only coming but going to be implemented in the world, in a practical way, mostly through education.

Many of us born at the end of the second world war and people of all ages and cultures wanted peace, humanity, common sense and common health for new generations to come. Mahatma Ghandi’s work was known throughout the world. My Father said, “that little man in a loin cloth can bring peace to the world.” In 1948 Ghandi was assassinated. New thinkers and visionaries (as there have been throughout time) were quite abundant. One of these was Master Oki and he had been in Ghandi’s ashram.

I have always had an interest in the East and thus I found myself with my then partner, learning Shiatsu, Macrobiotic philosophy and cooking from Aveline and Michio Kushi and others, and reading about farming according to Masanobu Fukuoka. Anyone around the world who had done similar things had also learnt stretches and group exercises created by Master Oki in his Mishima Dojo in Japan because they had gone there to study.

In the early 1980’s Tomoko and Hirotsugu Mori began teaching in London and Suffolk. They held meetings, meals, and study gatherings in their small flat in London whilst they looked after their babies, and the children came to the Suffolk retreats too.

Tim, Simon and Rosie were important assistants who helped to inspire us. Other Teachers were invited including Mizue and Hatsuko. And one teacher taught in a big hall near Seamark and we almost became the animals we were imitating through movement. Such was the intensity of teaching.

The regime could be very tough! Now Okido Yoga has developed to be more sophisticated. However this particular vision of how to integrate mind, body and spirit to be a dynamic, loving whole is at the core of it all. Something in Okido Yoga is a constant - co-operation and respect in all aspects of life – knowing your own life force and that life force can be gentle, patient, meditative, wise and living by example.

Imagine if this was taught in every school in the world, helping each other with exercises, cooking together, cleaning the house together, from the boss to the messenger person; understanding one another’s strength and weakness without hiding.

Dear Hirotsugu passed away and Tomoko continued to teach and develop Okido Yoga in UK. As I study in both Holland and the UK I sense the extraordinary integration and integrity of 3 of Master Oki’s original students, now unique teachers who have taught hundreds of students and many new Teachers.

Okido Yoga UK in conjunction with Okido Yoga Holland, has developed a strong Teacher Training Programme and in particular a method of mentoring which is thoughtful and open hearted with great attention to detail, truth, joy and freedom…