28 people gathered in Laren Dojo, Holland, in the weekend of 6 - 8 February 2015, to study under this theme. The range of the group was wide: 11 teacher trainees (first to third year), 2 teachers who had already completed the training of this system, 9 others including beginners and teachers from other systems, and 6 staff members. After arrival, all participants enjoyed lavender compress on their eyelids, which helped much out of tiredness of daily work and travel.

From Saturday morning till Sunday lunchtime, I gave a total of 8-hour lessons in 3 blocks. This was my third intensive seminar on the same theme following February 2013 and February 2014.

In Okido Yoga, asana, whether it is static or dynamic, is a practice of the state of dhyana as explained in Oki-sensei's book 'Meditation Yoga' page 62-63. Body, Mind and Breathing are to be united in one action, i.e. movement or pose.

In order for students to experience this, my lessons were programmed as follows:

- Joint-Freeing as promoting abdominal movement for deep breathing
- Posture awareness in both static/dynamic
- Lower body strengthening and energy-centering  on hara including practice of Mulabandha
- Refining awareness between breathing, physical intensity and mind (do-be-do-be- taught in 2013)
- Considering on two ways of action process: mind-body-breathing or mind-breathing-body.

Due to the participants' different conditions as well as variety of experience in yoga practice, I neither chose advanced asanas nor asked them to do so many times. I think it is far more important in an intensive seminar to test differences of sensations, learn how to find the best for themselves, and obtain hints of how to practise at home. The key is responsibly engaging one's mind to apply the three-hold principle of unification of body, mind and breathing in one action.

As well as attending these 8-hour yoga lessons, teacher trainees had been given pre-reading homework, which was two lectures from Oki-sensei's booklet 'Last Lectures'.

Apart from my lessons and discussions, Mizue led the morning chanting with the Heart Sutra. Morning walk, compresses, cooking of healthy cleaning food and all other work behind scenes were run by dedicated staff members: Ronald, Marleen, Anneke and Dennis. Such cooperation and such selfless services grow during the four years of this Okido Yoga teacher training and in continuation after that. It is beauty of Okido Yoga.

All photos (except the last one) were contributed by Monika Stepak. 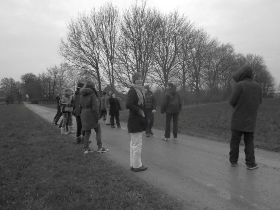 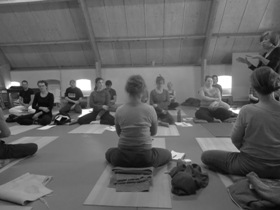 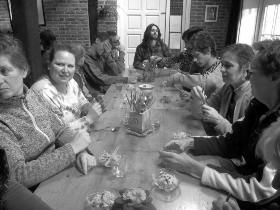 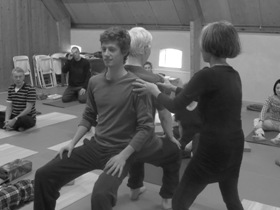 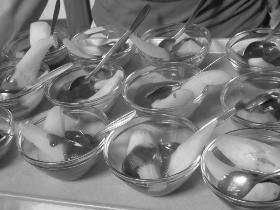 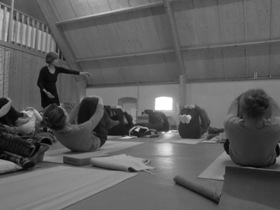 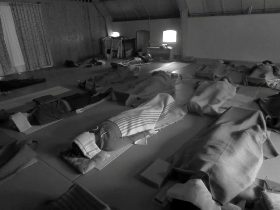 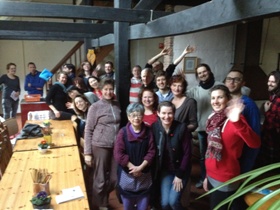