The Dutchman and the Sea – Peter Huijzer

And in me too the wave rises. It swells; it arches its
back. I am aware once more of a new desire,
something rising beneath me like the proud horse
whose rider first spurs and then pulls him back.
Virginia Woolf

No need to go outside. The single-glass windows did not hinder the crisp light from a large pale moon falling in. The cold breeze, finding its way through the many chinks of the old house, mingled with the dry, hot air from the radiator below. The sea was quiet.

I had arrived, after a night on a boat and a day of gradual advancements through the East-Anglian landscape, Thomas Hobbes as my sole companion. I had arrived at Seamark, the solemn but friendly white house which since 1984 has been host to the regular Okido Yoga retreats.

During the previous year, I had done a few of such retreats in the Netherlands, but I had never come to this place before. That meant that I knew what to expect, and yet that it was all new to me. Except for the staff, I didn’t know any of the participants, but the group proved vivid in all its diversity - two aspects which became probably most manifest when, on Saturday evening, we were all singing drinking songs together. “I am the music man...” Indeed, there was the drunkard’s joy, but without the hangover following.

Yet what was most new to me, in a Yoga retreat, was the presence of the sea: not even a hundred yards away from the house, nothing but a few stepping stones and a strand of pebbles in between. The sea, here, formed the undercurrent of Dojo-life. It provided us with a common point of reference for our breakfast conversations. “How’s the sea today?” “The waves are becoming higher.” It played a smooth basso continuo as the basis for our improvisations – for that’s what we had to do, when after a long rainy walk the picnic was not as we had imagined; or when during the massage sessions many of us did not know how to apply the right pressure, and nonetheless succeeded. And the sea turned into a guiding force for our meditations: often we sat down, in the house, but with doors and windows opened, so that we could let the wind fondle our cheeks, stare at the play of the waves, or close our eyes and listen to their moans and whispers.

It was easier, for me, to let go of my thoughts with these irregular movements around me. Whenever my thoughts were going astray (which, in my meditations, is rather the rule than the exception), I was soon called back into presence by a sound or a breeze. So I tried to listen attentively, and whenever I realized I wasn’t listening anymore, I knew I’d lost good concentration – and immediately found it again. 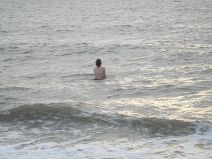 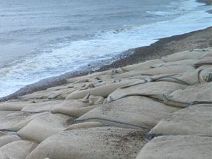 During one of the last sessions, directly after such a realization, my thoughts again went astray, but now as a reflection on this experience itself, in which I saw a metaphor for life in general. It was a cheesy metaphor, of course, but the harm was already done: it constructed itself into a poem, or rather into fragments of a poem, yet in which I recognized the possibility of a totality (during lunch that day, I had just told some people that I would love to write poems, only that I never had come any further than mere fragments, that never seemed to fit together into a whole). To make these thoughts into a poem, however, required some labor, and soon a writing session provided me an opportunity for that. But only half an hour was not enough, of course, so ultimately I spent half the night working on it, now that the words were coming to me so easily.

Still, such creative excitement does not automatically make a good poem. To my own taste, it is too philosophical, a bit grotesque and not very original in its imagery. I nonetheless decided to read it out, the next day, and then, by popular demand, to put it up here: because it reflects my experience of the retreat and the spirit in general in which I then found, and keep finding myself.

I was searching for inner consolation,
built systems of thought vaster
than Babylon's tower; got likewise confused
about the language to use, left them
standing unfinished in spiritual deserts
I took a practical turn thus pretending
to be a revolutionary, only born
just too late for the struggles that mattered

Searching for inner consolation I surrendered
myself to love's magic bonds; when about
to settle for decency, lulling into mediocrity,
the ties got severed – that singer I'd found
sang her siren's song, whereas I proved
no sailor so strong as to move
past those charmed shoals unscathed

Searching for inner consolation I kept
walking on. Then that day on the shore I was
struck by the sound of the waves which
I knew then had always been there –

Only I had not listened before