My teaching trip started with Long Weekend for Women, 13-16 July in Laren. From my point of view regarding lessons there wasn’t any particular difference whether a group was women only or mixed, and I believe that the other teachers shared my view, except for some of the evening treatment sessions. However, it was interesting to hear from a young participant, at the end of the course, that she doubted whether she would have shared her feelings and thoughts so easily to new acquaintances if it had been a mixed group. 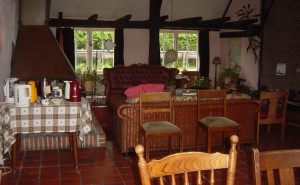 The daily programme ran from 6:30am till 10:30pm with 1 and ½ hour break after lunch, with chanting, correction of posture, yoga asana, meditation, acupressure, compresses and other treatments, philosophy, sharing and out-door exercises, and with carefully selected natural vegan food. These varied activities stimulated the participants, most of whom didn’t know each other beforehand, first to bring out stress and tiredness from daily life, to journey together in each other’s  ‘up and down’ phases and then to open up in the group as if towards their best friends. One participant said that she had never experienced such deep inner silence before as she did during lessons in this course.

It was not only the participants who had a full schedule, but also the four staff members (Mizue, Sara, Valentine and myself) fully rotated in teaching, cooking and managing the programmes or adapting to changing situations, with sensitive attentiveness required for 16 hours a day. Attending other teachers’ lessons was also important in order to share a common experience with the participants. Readers will understand why I counld take only one photograph at the end of the course. 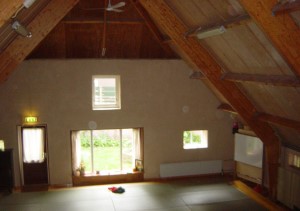 The key to working like this is not to do it with a duty-mind or tight tension, but to try to consider the whole group and situation as one’s own matter, which is another practice of expanding one’s mind wider and deeper regarding what ‘I’ is.  So, ‘Well done!’ to Sara and Valentine, the two teacher trainee apprentices.

Thus spending time communally for 4 days, everybody touched self-reflection, self-affirmation, and gratefulness to all; a taste of living together with awareness of individual importance; the joy of living.

Laren Dojo is located in the country side in the middle of Holland and has been guided by Mizue Tamaki since 1986. It is not a big congress centre with elegant bedrooms or luxurious furniture. Instead, the dining chairs are of a non-uniform design as gifted by different people, simple hand-made cushion covers have been washed many times, now showing different colours and shades, and many such things are prevailing harmoniously in the pleasant living room that was previously part of a farm house. And, once you get engaged into its courses, you will see the practical beauty of the big-barn dojo – the main space for activities – and realise its surprisingly well-organized functioning system, which Mizue’s ideas penetrate in details, in order to bring the greatest benefits of activities to participants.

Mizue says, ‘As we live in a world where there are people who have no shelter whatsoever and the earth is filled with pollution, it is our aim to keep the material aspect as simple as possible.’ Laren Dojo is a very unique place that can offer Okido Yoga holistic training, and is world-widely attracting students who want to study Okido Yoga seriously.

Okido Yoga Week in Belgium was organized by the International Shiatsu School, and was held in a boarding school, surrounded by large green spaces, near the River Scheldt (Shelde) in Antwerp. Two other courses ran in parallel with independent programmes, by sharing common time for morning exercises and meal times. 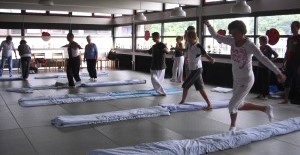 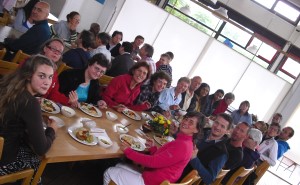 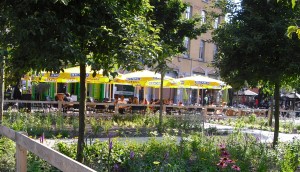 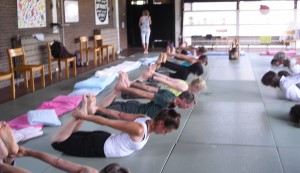 From my point of view a lot of effort was needed in preparing and discussing the outlines and programmes as the staff had never worked together in a team. And also because, it seemed, a strong image of physically dynamic exercises had prevailed there for Okido Yoga but not much of gently-deeply-penetrating exercises or the philosophy of Okido Yoga had been introduced in good balance. Although the course ran 15-21 July, I arrived on Tuesday the 17th after teaching in Laren. I soon found this team of staff (Jan, Iris, Wilfried and myself) was a most comfortable one to work in, with mutual respect and open-mindedness, and the participants welcomed me warmly.

On the next day, there was a big burst to openness at ball game time after the lunch break. Some participants were natural comedians, but gradually the whole group atmosphere was escalated and we just couldn’t stop laughing at whatever happened with the balls or people.

On Thursday morning, a couple of challenges called on me. One was from two people who had thought the ball game had not been for them and wanted to attend only their favourite lessons. Attending and experiencing all lessons without usual judgment is one of the keys of Okido training, but to make this possible, the staff has to be very sensitive and practical to respond to any problems. The other challenge came in the form of a polite inquiry at the breakfast table.

Just before the meals on Wednesday, I had taken the opportunity to introduce Oki-sensei’s ‘Pledge to Absorb Nutrients’ by asking all participants to read out its English translation together, which we always do in residential courses in Suffolk and Laren. The content of this pledge is not only for ‘good appetite’ or ‘thanks to the cook, farmers and nature’, but also for calling forth our awareness of and humbleness to the Life-force. We can meet the essence of Okido Yoga in the words of Oki sensei’s pledges for basic daily life activities from waking-up to sleeping.

The comments made at the breakfast table were that some participants, or many, felt resistant to read it aloud as a pledge. I had never met this problem before, but the importance was neither taking form nor following someone else’s pledge blindly, so, we did silent individual awareness for the next meal and took the subject on board in the whole group discussion. Many contributed their opinions. Even after that, there was more development on the subject, which felt really good to talk about openly and honestly, whilst respecting different views and experiences. 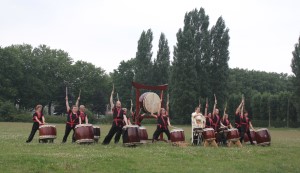 Through Thursday and Friday, the course continued with effective lessons, healthy food, jokes and laughs. The last day had the only fine-weather morning, and so we walked to the beach to exercise, walked back, gathered in the dojo and meditated. Then everybody, including the staff, wrote reports on their reflection, inspiration, and evaluation of the course. After that, we sat in a circle and spoke about our own thoughts in turn.

A participant said:  on occasions of partner exercises, she chose her favourite people in the beginning, but later she came to work with whomever, which was a good feeling of liberation from her ordinary judgment; it was a feeling of growing. The person who had earlier wanted to attend only her favourite lessons (now) said: she had an incredible week, strongly supported by genuine-hearted people, in group intimacy as well as individual space. Another said that he felt much stronger than before and received a lot of inspiration about practice in daily life. Another participant said: from his past experience he had come to join a very tough physical course but, when meeting the diverse group (male/female, young/old, fit/ill) on the first day, he had doubted whether he was in the right place, and then journeying together till the end, he realized a different kind of value in working and sharing joy with other people.

After everybody finished the evaluation, the participants took the last opportunity. One person read out his very own ‘Pledge to Absorb Nutrients’, and the whole group presented a ‘chanting’ book to the staff members, singing a verse to each individual of us. It was so moving. At the very end, we had a photo taken and had lunch together.

I am very glad and moved with this achievement together, and with much more, fun and warmth. I am going in November for another Belgian Okido Yoga Week. And it looks like some people are coming again. Looking forward to it! 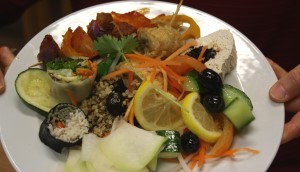