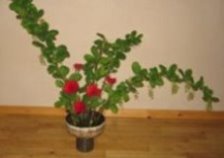 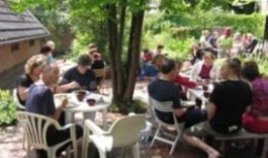 There were people from Australia, Belgium, Holland, UK and Japan. A group who had been training for almost 2 weeks was joined by visitors who had studied Okido Yoga in Japan. It was beautifully organized. The Dojo and garden were prepared for celebration and the sun shone brightly. Ikebana graced each room. There was a stall with traditional Japanese art for sale and Meike played the Taiko drum. Mizue Tamaki made a short presentation and showed a black and white film of Master Oki helping a young teenager. It was announced that the original illustrated Kyoka-ho work book is available again in an excellent translation. This was followed by truly delicious Italian homemade pizza and salad. The garden filled with conversation, joy and laughter, followed by classes in Kyoka-ho and children’s yoga.

I've loved film from as long as I can remember. From Hollywood blockbusters to Japanese anime films, the range of what I watched was wide. Many captured my imagination and fuelled the daydreams that would get me into trouble at school! I don't watch films as often as I used to anymore but they continue to be a source of food for thought and reflection. My preference is always to go to the cinema. I love sitting in an auditorium with other people and having the visual impact from a big screen. Sharing the experience with friends who appreciate film in the same way is a real privilege. We delight in discussing it afterwards, sometimes even a good time after the event.

One of these friends has her birthday on New Year's Day. Thanks to her I started the year reflecting on the meaning of life through watching one of Japanese director Akira Kurosawa's black and white films, Ikiru (To Live). It is the story of how a middle-ranking bureaucrat finds purpose in his life after discovering he has terminal cancer. Through devoting all his energy to make possible a community project, he finds peace and joy. Set in 1950s Tokyo, the story also highlights the corruption in local government and the separation that can exist between people, even family members living under the same roof.

It was with a fair amount of expectation that I went to see Vietnamese director Tran Anh Hung's latest film, Norwegian Wood, more recently. I had clear memories of feeling captivated by the visual beauty of his 2000 film At the Height of Summer and the story this time was taken from a novel by Haruki Murakami, one of my favourite writers. Once again the setting was in Japan but this time in the revolutionary 60s and making full use of colour. Love, loss, desire, sexual intimacy and growing up is poignantly explored through the experiences of a young man and woman brought close together by the suicide of a mutual friend. I was struck by how Nature is powerfully portrayed as a place of retreat and healing away from the city. The scenes where the camera zooms out to show human figures against the natural landscape have a beautiful and haunting effect. I found the story sad and somewhat disturbing but I recommend it for its stunning cinematography.