26 April - 15 May 2016, in the most beautiful time of the year in Laren, a 20-day special event was held in order to celebrate Laren Dojo’s 30th Anniversary. The programme was as follows:

I arrived in the evening of 5 May and was warmly received by all those I had both known and not known. Next day, I attended the final evaluation gathering of the Non-salt Falf-fasting group. Deep self-observation was expressed by everybody. Such voices from hard-working personal experience are so meaningful.

A slot of several hours between the end of one seminar and another is a time for cleaning and re-organising which the staff and staying-in students are expected to do. There are always household chores in the dojo as there are at one’s own home. Working together makes us want to work and really lifts up the spirit of sharing time and space. Okido Yoga’s background is a communal life, which idea Oki-sensei took from his stay in Mahatma Gandhi’s ashram.

From this day till 11 May continuously ran three intensive seminars by Maartje van Hooft, Ronald Boin and Tomoko Mori. But the slots before breakfast and after supper as well as the three meal times set the basic frame of the dojo life whatever the theme of a seminar is. One of the basic and most characteristic part of the dojo life is the Heart Sutra chanting, the first gathering of the day. After reading the chanting, Mizue gives a short speech based on the Okido philosophy. The sutra talks about the essence of life: Void. Normally the word ‘void’ is explained as nothingness or emptiness. But these abstract words make us wonder. When we are alive, we cannot be nothing or empty. So Oki-sensei interpreted ‘void’ as not 'nothing' but as everything in the most balanced state, therefore it feels as if there is nothing. This is ‘void’ ... The last part of the sutra goes '... gya-tei, gya-tei, hara-gya-tei ...'. This means 'go, go, go to the other shore'. Again, this abstract phrase was interpreted by Oki-sensei as 'practise, practise, practise till you gain the truth'. Thus comes the Okido philosophy 'Unite your action and knowledge.' Mizue's experience as the translator of Oki-sensei's lectures is so valuable to us.

We often went for a silent sunset walk after supper. The sun shines all day. Birds tweet all day and wash away busy thoughts from my brain. The evening pink light softens my eyes. Also we sometimes made a bonfire. How nice to sit around it with whoever comes near, with no need to talk, as knowing we appreciate each other to be a part of our life. In the evening of 11 May, Tatsumura-san and Japanese students arrived.

12 May had been planned to be a surprising day. This day, another beautiful one, started with the awakening pledge. The idea of making pledges is for each person to do his own pledge in order to connect his mind and action, but here we recite together pledges OKi sensei presented as examples, which helps deeper understanding of the Okido philosophy. The awakening pledge is like this, "By the grace of Nature I have now awakened, which means that I have received the blessing of sufficient physical energy to live. This day I pledge that I will live fully, using all the energy I have in all that I do." 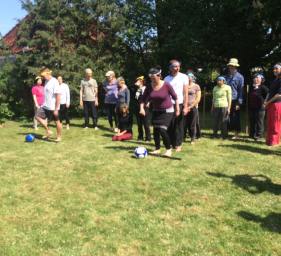 After breakfast Hatsuko Kanazawa gave a lesson. Meanwhile, I was organising a sports day with Peter Huijzer. At Oki-sensei’s Mishima Dojo, we used to this activity maybe once a month in place of Kyōkahō. Mizue asked me to pass this tradition to young Peter. Peter named our sports day as 'Okido Olympics'. All participants mixed except two working in the kitchen. It was a great fun. No wall of languages or characters, but pure laughter is essential. Later in the afternoon Anna led an art lesson to make a free self-expression by drawing/painting.

On 13 May two parallel lessons ran for 8 hours. While Tatsumura-san taught Dharana to the non-Japanese group, Tomoko gave lessons to the Japanese students. In the evening there was a Q & A session in the largest group of 32 people so far. Then we celebrated accomplishment for people who had stayed for the whole three week programme, with a glass of beer or juice (or, two or three glasses, I don't know). 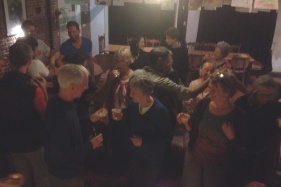 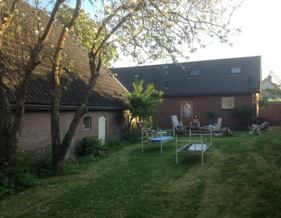 On 14 May, Tatsumura-san’s 5-hour finger yoga seminar ran for both day visitors and the staying-in students. Then we all did a silent walk to ‘De Dikke Boom’, which is said as the biggest elk tree in Holland with 25m in height and 7.6m in circumference, and 450-500 years old. We made a chatty walk back to the dojo. The evening, the topic became preparation for the big event on the following day. First, 21:00-23:30, held was a grand staff meeting led by a most reliable and elegantly firm leadership of Marleen Reith. Then even at midnight, as the long staying-in students turned to be dedicated volunteers, some people were still working.

7:25, 15 May, the big day started. The rain stopped and the sun was coming out. 22 hard-working people first recited Oki-sensei’s Working Pledge and continued their tasks as set out. The atmosphere was heating up to ‘joy to work - joy to give’. My impression was, “This is the same as in Oki-sensei’s Dojo. Breakfast at 9:00. Then day visitors started arriving.

From 10:45 two parallel lessons ran in the big barn dojo and the upstairs dojo, meanwhile visitors kept coming, old acquaintances finding each other, lively talks going on in a festive mood.

The main part of the celebration day was watching Oki-sense’s video and opening the meditation hut, which photos and the background story are accessible using the links at the top of this page. There was also a certificate presentation to two people who had completed the teacher training most recently. These were Trish Dent and Anna Mackenzie from the UK, who had followed the combined scheme of Okido Yoga NL and Okido Yoga UK.

This was followed by lunch, afternoon lessons and more lively talks between old friends.

17:15 Finale! Remembering Oki-sensei's time in Mishima Dojo, we sang a song in a large circle: "Itsu-made-mo, taeru-koto-naku, …”, which means “Forever without ceasing, let’s keep our friendship. I say 'Good-bye' for today till I meet you again.”

No small differences between each other: nationalities, tendencies, habits, etc. Eating from the same pan, working together, acknowledging and covering up each other’s weak spots, as a family, works to create peace and happiness around us. Okido Yoga is a life-style yoga.

Thus we celebrated 30 very-intensive years of toughness, happiness, tears and laughter, learning and making a huge family. Everybody deserved cheering each other! 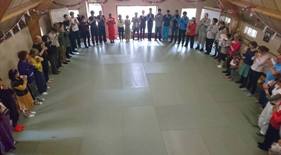