My last training before finishing the 3rd year. It means that I may teach weekly lessons after this training and three reports to write. So this program is important for me to finish the first part of the teacher training, also more important for me, due to my experience of the last survival in 2011.

What I learned from the Survival 2011

In that year it was not announced as a Survival. It was a part of the Kyoka-Ho weekend training. On Friday evening, after an intensive lesson, at 10:30 pm, I thought I could go to bed and rest. Instead we had to prepare ourselves for a walk. A long walk. Backpacks were filled with food, drinks, sleeping bags, rain coast, etc. I like such kind of surprises, so I started with a lot of confidence and the mindset “I will make fun whatever will come on my path”. But the night was dark, very dark, very very dark and I was really scared! And proud, I guess now. To the person with whom I was walking and talking at that moment, I did not mention my fear. I did not talk about it, I kept it for myself and cramped a muscle in my left leg and could not finish the walk with the whole group. Afterwards I realized I had to share this fear. It was and it is not weak to share my fear. 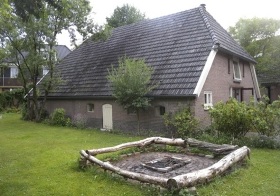 Now this program was announced as Survival in an unexpected environment, so I expected another night walk and mentally I was kind of prepared. For 9 days I was already living in the dojo and did half fasting training, study of bhanda and corrective exercises. The survival I started with this recognition of my fear in the dark. When there was the possibility of lending a torch from the dojo, I took immediately the opportunity to share my fear with the group. That felt good. But I still had to go through it. After the warming up exercises in the dojo I was really tired, so I was curious.

When we walked on the Summerpath, a quiet dark path at night, only 5 minutes walking from the dojo, Saara took my hand. We continued together hand-in-hand, and that brought me back a memory of my childhood. I think I was 12 years old. Summer holiday in Italy with my parents. In a beautiful warm summer evening, my sister and I went for a walk on the beach. All of the sudden, out of the dark, there was a man playing with his sexual organ coming in our direction. We ran away. Nothing really happened but the fear was there! I spoke about it with Saara. That was good, just at the beginning of the walk.

At the same time I had my mantra “don’t force, don’t waste, continue”. The first two are the most important to me. So I walked my own path consciously and that was good.

In the open field or on the road, where cars could ride as well, the darkness was OK for me. The most scary was walking in the wood where it was completely dark. There, partially I was happy with my torch … It did not take away my fear, the fear was bearable, it was there and it was allowed to be there (wow)! And … I saw dark men everywhere … My body kept going well. I enjoyed seeing that at 2 am. There was light again on the horizon, although the day really started about 5 am when the first birds began to sing. I enjoyed the silence and I enjoyed talking, when we were really tired, so tired that I was like sleep walking. Talking kept me awake, I noticed, and drew away the attention of the body.

Then I felt less tired and less stiff. During the sleep walking stage, just before dawn, I saw people everywhere: a woman on a bike, somebody sitting on a bench next to the road. That was really weird! Of course there was nobody. When we talked about that sleep walking moment later, I heard from some people that they had the same experience.

The stops were all very nice, thanks to the bad weather forecast! The first was on the road with good exercises led by Scott. The second was at Ronald’s house. How lucky and cozy doing yoga next to the fireplace. The third one, there was day light again and we “hang-out” in a haystack, which was great, and we could go to a real toilet. And then we, the women, could sleep in a real bed, I felt so spoilt! But that feeling was completely gone, when we had to wake up after only 40 minutes’ sleep. I could hit everybody. I was so irritated.

We continued with do-in exercises under the guidance of Scott. Thank you so much! The exercises changed my mood again in the positive way. My body and mind were together in one line again. This was a beautiful experience! Just before leaving again I stimulated the ashi-no- sanri point on my each leg. This point is often treated in shiatsu, located in the superior edge where tibia and fibula meet each other, as well indicated as the 36th point of the stomach meridian. The legend tells that, in the former times, the rickshaws pressed these points when they were tired. San means 3 and ri means 4km in Japanese, so they could walk another 12 kilometers.

I just continued, trying not to waste energy or force and that went fine, although I felt my body protesting: knees and hips, but not my feet fortunately. We started to sing, to be less focused on the body.

When we arrived at the finish I felt satisfied, I made it. We had walked 37 km from Friday 11 pm. till Saturday 12.15 pm. Katrien took care of us as a mum and brought us some strawberries.

But this was not all. Knowing Ronald as an okido teacher for 7 years now, I was not surprised there was another challenge to go before we would have lunch. The finish was a climbing place in the woods. Wow, what a beautiful place and very professional explanation how to climb from tree to tree, all safe with harness and lines. I just continued although I was not really in the mood.  You feel strange after walking all night and then going to a climbing place. In the beginning it was very difficult to keep focused on the explanation. It was for my own safety, but it was hard to understand. I heard what the woman said, but it did not really come to my brain. So, it was very good we first had to practice climbing with the instructor. 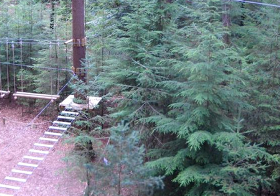 The first thing to climb was for me high enough and I felt I was afraid of the height. But then almost immediately, I thought, “With this harness I am safe, I cannot fall, and I will only hang there, which is made for the purpose. So there is nothing to worry about. The fear was gone and I had to concentrate fully to get to the other side. It was amazing, I did not look to the ground, I was aware of the fact that I did not feel any pain or stiffness, climbing from one tree to another. That was a very interesting experience. When we came to the third height level, it was enough for me.

That one was really too high. I was considering to do another track, where you had to slide from tree to tree like Tarzan, which was fun. Then the fellow student with whom I had worked during the preparing exercises for the walk, came back and he needed to cry on my shoulder. I had come to a point that everything was OK. We sat in silence, he talked and it was OK. We had a cup of tea with the others who had stopped already and it was OK.

Again I felt spoilt during the lunch at Ronald’s house. I was hungry at 2:15 pm. Kyoko, his wife, cooked a delicious and abundant meal. Hmmmm! It all felt a beautiful harmonious family lunch. 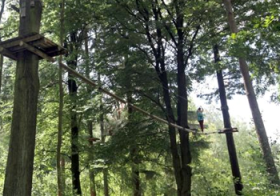 When we arrived at the dojo at 4 pm, I thought, ‘Fine, we now do the sharing. I pack my things. We drink some tea together and I can leave the dojo at 5 pm. That’s it. My 3rd year will be completed …’ NO WAY! We had to go again to the dojo for exercises …. I was fed up. It was really enough and my eyes were filled with tears. But then there was Katrien again and she encouraged me to come, saying that it would be OK. And yes, it was OK doing our own stretching and then doing shiatsu together. That was good!

At 5 pm we finished and then we shared our experiences. That was the best part! (I could not imagine that sharing would become a favorite of mine.) While the other persons were telling their experiences, suddenly I realized that there was another scary event I experienced in the dark: 15 years ago, at night, after a long day working and a meeting with the whole company, I had been robbed by a dark man who had threatened me with a big knife at the parking place.

After that happened, I had stayed at home from work for a week, I had not dared to go alone to the supermarket in front of my house during day time (!), and so a friend of mine had had to come to go with me. For a year or so, I had been really afraid of dark men, especially at night time. But the fear had faded away. It had not stayed active in the environment where I had lived at that time as there had been hardly any dark people. The memory had moved from the new layer of my brain to the old layers and other body tissues and it had seemed that I had forgot it. But I had not. This robbery fear had been the fear what I had been feeling during the survival in the darkness. And this experience explained why I saw dark men everywhere in the wood.

This was the biggest revelation I had. I was very grateful for it when I left the dojo much later than I hoped I would leave. And still I am grateful for this experience, although I still can feel the fear and the emotions while I am writing these words down. I am really looking forward to the next time. Thank you so much. It was a lot this time!!!

After this 10 day retreat I feel different! More stable, more grounded, more united, willing to practice and learn from my own practice, willing to eat differently, willing to be soft with strength deep inside and go with the flow. It is amazing, but it is true. Thank you, truly!